The Fear Index by Robert Harris 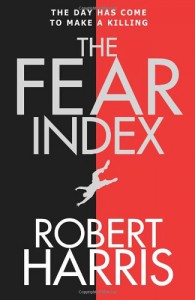 The owner of a big hedgefund company, Alex Hoffman, physicist and inventor of an algorithm that could revolutionize trading, is attacked one evening in his home in Geneva. After getting checked at hospital which got him the recommendation to visit his neurologist with the headscans that were taken, he goes to work the next day because of a big investors' lunch. But strange things keep happening: the delivery of a book by Darwin, he finds that he apparently bought out his wife's art exhibition... and then the algorithm starts making risky trades...

This novel starts out pretty exciting, the break-in, a possible conspiracy, a computer algorithm running amok. But it all gets a bit confusing the longer the story runs: Hoffman's history of mental illness for one, his dabbling with artificial intelligence on the other side... but all this doesn't really explain what actually happened. Did Hoffman arrange for everything, including the break-in and his death, and just forget it in a psychotic break, as is suggested in the end? But what about the risk-advisor who falls into the open elevator shaft? He can't have foreseen that he would step into the lift at that moment - so, did he program the algorithm to kill any opponents? Or did he program some self-protective subroutines so that the algorithm decided for itself to kill him in self-defense in order to have no more master?

But in the end, it all gets wrapped up too easily, the company earns an enormous amount of money and all's swept under the rug, the algorithm lives on... and Hoffman disappears. Honestly, I would love to know what happens next and hate the way this novel keeps me hanging at this point of the story.

Still: a good read, albeit one that leaves me with more questions than it answers.