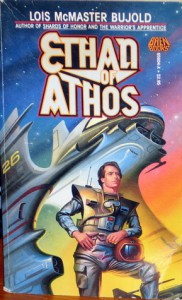 This is a side-novel to Bujold's Vorkosigan series with Miles only being mentionned.

The planet Athos is facing a crisis: populated only by men, the eggs needed for reproduction entirely come from ovarial tissue brought with the founders to the planet and/or purchased via trade. Now, the latest shipment turns out to be replaced by non-usable material. Ethan, a specialist in reproductive medicine (who's never seen a living female), is sent out from isolationist Athos to find out what happened to the shipment and, if necessary and possible, procure new ovarial tissue. Caught ill-prepared, he finds himself on Kline Station and is soon embroiled in a plot involving Elli Quinn, Cetagandans, telepaths, station environmental control... and women in general.

A rather average novel, I'm afraid, as it concentrates more on action and plots-within-plots rather than on the characters themselves. Therefore, many questions about Athos remain unanswered: I mean what led to the Athosian society's founders to emigrate and denounce/villify all females? How does a society with only one gender work? Why not focus on this social and sci-fi issue instead of devolving into another rendition of the outsider meets real world-theme?

Also, I'd have liked Ethan to interact more with Quinn or Cee... because even though the whole novel is from his point of view, he spends most of it confused, chased around, interrogated, told what to do or finding Cee cute. Just those first 2 chapters showing him in his usual environment on Athos aren't enough to make him become real as a person...

So, there's some groundwork in world-building and in characterization but it lacks some serious fleshing out - and knowing what Bujold's capable of in both regards, this leaves me rather unsatisfied.