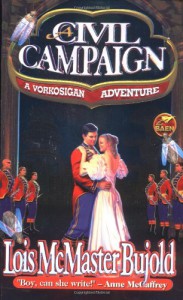 Oh, I've been looking forward to re-reading this novel, and it didn't disappoint.

Again with changing point of views, this novel is roughly told in 3 connected parts:

* Mark and Kareen's return to Barrayar, the subsequent cultural shock, and them starting a business operation.

I adore the first half of this book: Miles setting up his dinner party, hearing Mark's voice again, Kareen's struggle against the rules and regulations coming with her return home from liberal Beta Colony. And then there's Mark's bug butter enterprise with hapless (and clichéd/absentminded) scientist Enrique. There isn't a page that doesn't manage to bring a warm feeling to my heart, all the underlying shows of loyalty (Mark's Killer making an appearance when Mark perceives a threat to Miles's courtship), Ivan's good natured teasing - and of course, trying to make things difficult. The inner voices and humorous situations that don't fail to bring a smile to my face. All culminating in that absolutely hilarious failure of a dinner party because of a lack of communication and ignorance of social customs. I can't remember having laughed so hard reading a book as I did when the returning Vorkosigan parents come across Enrique trying to recover all the dispersed butter bugs.

A distracted-looking Enrique, his wiry hair half on-end, prowled into the great hall from the back entry. He had a jar in one hand, and what Miles could only dub Stink-on-a-Stick in the other: a wand with a wad of sickly-sweet scent-soaked fiber attached to its end, which he waved along the baseboards. "Here, buggy, buggy," he cooed plaintively. "Come to Papa, that's the good girls..." He paused, and peered worriedly under a side-table. "Buggy-buggy...?"

"Now... that cries out for an explanation," murmured the Count, watching him in arrested fascination.

It doesn't matter that the end is a foregone conclusion - that was obvious with the introduction of Ekaterin in Komarr. Too much time has been spent on her characterization and "voice" to have her fade back into the woodwork. So it's not the end that counts, but the road getting there. And perhaps Miles learned a lesson in humility... and also trust - in himself (because most of the spectacle stems from the disbelief that Ekaterin could ever choose him, a physically handicapped man) but also in others.

This is also a novel about growing up and stretching (social) boundaries. Cordelia's independence shouldn't pull wool over our eyes. On Barrayar women still are house-bound and don't play an overt role in society (with Lady Alys the obvious exception). Even with the invention of the uterine replicator which makes body births unnecessary, a real change towards equality hasn't occurred yet. Women are there to be married off, they don't have custody over their sons etc. A Civil Campaign addresses this issue in different ways:

We have Ekaterin and her custodial issues over Nikki (and her multiple husband-wanna-bes) where some estranged cousin of her late husband's wants to remove Nikki from her sphere of influence. Unfortunately, along with Miles's courtship this is solved by the traditional approach: In many instances she's a bit of a damsel in distress. Whenever something bad happens, a man is there to help her - be it Illyan, be it Gregor, be it her uncle, be it Miles. That Miles gains custody over Nikki in the end isn't mentionned any further. Well, to be honest, neither is the pressure on widow-Ekaterin to remarry. Granted, as said before, it's a foregone conclusion, but in the end she was pressured into her decisions. And as much as she might think otherwise - or that she might have made the same decision but granted more time for it -, the whole process, especially given her experiences with her late husband and the events of Komarr, leaves a bit of a sour taste.

Then there are Cordelia and Lady Donna who bulldoze their way through social boundaries. For Cordelia they don't even exist. Being Betan she isn't indoctrinated in Barrayaran customs but continues to view them as a kind of amusing anomaly... and fights for Mark and Kareen's right to lead their lives (and their relationship) the way they like. In a way Miles is Aral's responsibility (honor vs reputation) - and Mark's Cordelia's project.

Just a small point of criticism here: Cordelia's perhaps the one character that could use some more fleshing out, to be honest. She comes across as some kind of super-woman, all-knowing, omnipotent. Even Aral has his flaws - and he's had them from the start. And all that talk about her being Betan... it rankles a bit, her being the super-liberal, highly civilized woman for whom Barrayaran politics only serves as amusement. But that only renders her two-dimensional in the end.

And Donna? Well, in order to obtain the Vorrutyer Countship (which she de facto already held when her brother was still alive), she undergoes gene therapy on Beta and reinvents herself as Lord Dono. Interesting precedence?

I know I repeat myself, but it's this confrontation with tradition and regulation that make the novels set on Barrayar so interesting to me. Miles is a fascinating character, and I love him and his idiosyncracies. But put him back in this narrow-minded environment (albeit which already has changed and opened up so much within the whole series), and things get really interesting. Not to mention the fact that all the Barrayaran-based characters and their interaction are complex and vastly enjoyable in and of themselves. What would this series be without Aral & Cordelia, Ivan, Illyan, Alys, Pym or Gregor?

In a sense, this novel could have been the end of the series. Miles is settled in his private and professional life, he's accepted on Barrayar as heir to the Countship and important political figure himself. Mark's on the way to recovery. Gregor's married. And Cordelia and Aral enjoy their retirement on Sergyar. The rest of the series only puts on paper what's inferred here. But that's just a thought...

Anyway, an absolute highlight in the series.