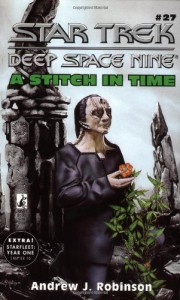 Stories about Cardassia and Garak have easily become my favourite part of TrekLit nowadays, so it was time to reread this excellent "autobiography".

Divided into 3 parts, A Stitch in Time sheds light on Garak's history, the way others always made decisions for him, the way loss and betrayal shaped his life more than loyalty and friendship. And it all starts at school where he meets life-long friends and equally life-long enemies, and the love of his life, Palandine, who indirectly causes his fall from power and exile on DS9.

This part is a fascinating glimpse into Garak's history with various characters (such as Dukat, the story behind "The Wire", Tain), Cardassian society as a whole, but also into the microverse of Garak and his family. Tolan Garak, the man he believed to be his father and who turned out to be his uncle, ultimately perhaps influenced his life more than Tain and his mother Mila. Because while Tolan only belonged to the frowned-upon service class he nevertheless was more independent from outside influence than upper-class men, including who Garak comes to be. It takes years for Garak to see that.

The second part are diary entries between "In the Pale Moonlight" and his departure for Cardassia which relay Garak's conflict (culminating in the panic attacks) between betraying Cardassia and ultimately saving it from the Dominion together with the Federation. It highlights the growing distance between Julian and him, and the anxiety just what Cardassia he'll be able to return to. What will be left? As a side story, he meets a friend of Ziyal's who turns out to be an agent of the Khon-Ma, assigned to kill him - a woman who survived the destruction of the shuttle back on Bajor that cost her family their lives and for which she holds Garak responsible (again see "The Wire").

Finally, the third part is set on post-war Cardassia. Garak has returned home, a world in perpetual twilight after the Dominion tried to exterminate the population, leaving over a billion dead, a world in ruins. He turns Tain's home into a memorial, a place where people can mourn and slowly move on. And for the first time in his life he finds himself able to choose his own path, meeting old friends and enemies and determining Cardassia's future.

In the end, Garak comes full circle, open to new ideas because he's learned to adapt due to his ever changing surroundings. And I think Tain would turn in his grave if he saw Tolan's influence prevail over his own, resulting in Garak's interest in the Oralian Way (even if also as a means to find his love Palandine after the war - BTW, curious how the later novels don't mention her but emphasize Garak's friendships with Bashir and Parmak)... but it's gratifying to see that all of Tain's machinations, his power and loyalty plays, his treating people like pawns on a giant chess board ultimately fail.

A highly recommendable book - and together with "The Never-Ending Sacrifice" maybe the key to understanding the Cardassian mindset.