Star Trek: The Next Generation: Cold Equations: The Persistence of Memory by David Mack 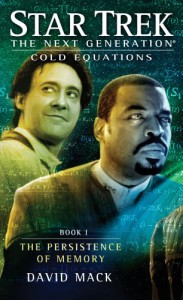 Star Trek: TNG hasn't been on my reading list for quite some time, actually since David Mack's "Destiny"-trilogy, but when I saw the cover of this first part of his new trilogy, celebrating the 25th anniversary of TNG, I knew I had to pick it up.

Dr Soong's androids which were stored at the Daystrom Institute on Galor IV are stolen. The Enterprise, already en route to Galor IV because B-4 was on the verge of experiencing a cascade failure and Maddox requested Geordi's assistance, investigates the theft. Their sole lead, a man who also appears to have an interest in the theft and apparently can follow a cloaked ship that's suspect of having the androids on board, leads the Enterprise to a planet with a Breen research station. Worf, Choudhury and Geordi are sent on a secret mission to retrieve the missing androids. On the ground they are already expected by their lead - who turns out to be Noonien Soong. But not the Dr Soong who died in "Brothers", but a Dr Soong in perfect health and youth. And so Soong tells the away team what happened to him after the Enterprise left back then.

It took me a while to read this novel because, especially the first half of Soong's "monologue" dragged on quite a bit. It got better, though, when Soong shifted his focus from his own needs and wants to his sons', and especially after he got the news of Data's death. Then he really grew a heart and soul, and became more than just a creator of extraordinary life-forms, he became a father, willing to ultimately sacrifice everything for his children.

So, in a sense, the monologue did its job in portraying Soong's shift in perception and motivation, but its length and the 1st-person PoV just didn't quite work for me.

On to the Enterprise-part: As said above, I haven't read any of the relaunch-novels except Destiny - and I wasn't really thrilled by the E-E-parts in that trilogy, either. Maybe because (excepting Picard) there're no longer any of my favourite characters on the Enterprise, maybe because I didn't know all the background of the new characters up to Destiny... I don't know. Choudhury's sudden and senseless death didn't really affect me at all. In that situation it was obvious that she'd be the one who'd be killed because she's not a canon character where any studio/PTB etc could oppose her death for franchise-reasons. I regard any of the characters created exclusively for TrekLit as red-shirts, so, maybe that's another reason why I rarely form any attachments to those characters (the exceptions are Keru, Vaughn, and the captain of the research ship of the fleet in Children of the Storm - his name escapes me right now), come to think about it... Worf is really doomed in his relationships... but even that doesn't really affect me since he's one of my least favourite characters of all of Star Trek.

So, to sum it up, I was a bit underwhelmed up until the 90%-mark of the novel (read it on my Kindle). But I simply *loved* Data's return. Soong's sacrifice, the way Data didn't want him to sacrifice himself, the joy and wonder, especially Picard's and Geordi's, at seeing Data again, Data's doubts about who he now is... that was simply perfect.

Despite all his strengths, Data now is as fallible and perhaps torn as everyone else. And that offers plenty of opportunities to explore him. For example, to what lengths will he go in order to revive Lal? Will he step over the line now in order to get Vaslovik to at least spill how he revived Julianna?