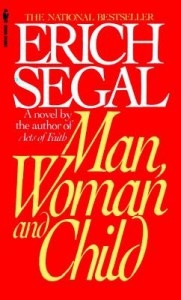 Sheila and Bob lead the perfect life, successful in their jobs, 2 daughters, an epitome of a marriage - but Bob has kept a secret for 10 years, a secret that comes back to haunt him when he takes a call from France.

Years ago, I read Segal's "Doctors" 3 times, I read Acts of Faith, Love Story, Oliver's Story and Prizes and I remember them all, especially Doctors, very fondly. Maybe that's why this book ultimately disappointed me. First of all, the prose seemed incredibly simple and dispassionate at times.

And secondly and more importantly, how can a matter so complex as having a child from an affair a decade ago turn up, be handled properly in just over 200 pages? 50 of which deal with flashbacks to the beginnings of Sheila and Bob's relationship and to his affair? The focus is with the family the boy comes into, but the boy himself who after all just lost practically his whole world, is more a footnote. Where's just one thought about what's best for this child? Instead we read about 2 spoiled girls, Sheila who's tempted to sort of return the affair-favour, and Bob who just feels guilty. But the premise would have deserved much more...

That the book still gets an average rating is due to the fact that in the end, I got sucked into the story. But the disappointment remains.